When you find out you are pregnant, there is a lot of information to wade through. One of importance piece is due dates – how are they determined, and what do they mean for you?

There are three methods used to determine how far long in a pregnancy a woman may be. They are the woman’s last menstrual period, an ultrasound, or a physical exam. Let’s take a look at all three to understand how they are determined. 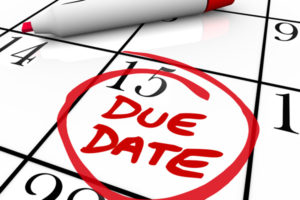 The pregnancy is technically timed from the first day of a woman’s last menstrual period. This is because most women will not know the exact day of conception, but they will know the first day of their last period.

The average woman’s cycle is 28 days, and ovulation typically occurs about 14 days before the next period starts. So, by the time you miss your period, you are already two weeks past conception, but a doctor would count back to the date of your last menstrual period, so you would have a gestational age of 4 weeks LMP.

An ultrasound can be a more accurate way to date a pregnancy, especially if a patient may not remember the date of her last menstrual period. An ultrasound will take a series of measurements to determine the gestational age. Ultrasounds can often give more accurate due dates because the LMP method is based on every woman’s cycle being 28 days, with ovulation occurring in the middle. This isn’t the case for all women, however, so if a woman’s cycle is longer or shorter than 28 days, an ultrasound may be able to determine gestational age more accurately.

If performed early in pregnancy, an ultrasound can determine due dates pretty specifically because most babies grow at the same rates early on. However, as the pregnancy progresses, ultrasound can be more difficult to accurately determine due date as babies grow at different rates. By the third trimester, an ultrasound can be off by a few weeks, based on how that specific baby is growing. But, according to the American College of Obstetricians and Gynecologists, the most accurate way to date a pregnancy is through a first trimester ultrasound.

A physical exam can also be used to estimate gestational age. The doctor will perform a pelvic exam at appointments. As the pregnancy progresses, the uterus can be felt, and its size can offer an approximate due date. This isn’t always accurate, however, as many factors can affect how the uterus feels, including a pregnancy with multiples, obesity, and other issues.

So, it is possible that a woman could receive different due dates during the same pregnancy. This is not cause for concern, as long as the due dates are all within a few days of each other. It is important to understand how the due dates were calculated and then remember that an estimated due date is just that – an estimate.

The average pregnancy is 280 days. However, some women will deliver before that, and some after that. A normal pregnancy can last between 37-42 weeks – which can leave quite a discrepancy for when you may give birth. Every woman’s body is different, and every baby grows at different rates. However, knowing an accurate estimated due date can ensure that you receive proper clinical care.

If you have any questions about estimated due dates that you are given, ask your health care provider to offer a further explanation. When you are informed, you are empowered!