State of Florida law requires any woman considering an abortion to have an ultrasound examination prior to the procedure. The woman then has the choice whether to view the live ultrasound and have the ultrasound explained to her. While opponents of abortion may claim that this is an unnecessary step in the process, it actually has very important medical reasons.

Second, an ultrasound can determine the gestational age of the fetus. This is important to help a woman make an informed decision because the age of the fetus will determine what abortion procedure(s) are available. For example, the abortion pill is approved for use by the FDA only through the first 10 weeks of fetal development. That means the abortion pill can only be taken for about the first 70 days following conception. After that, abortion options change to surgical abortion procedures. The earlier the pill is taken in a pregnancy, the more likely it will be successful in termination. 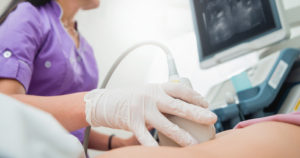 An ultrasound can, in fact, empower you to fully understand all of the options available to you and make the most informed decision about the future of your pregnancy.

Ultrasounds and pregnancy tests are free of charge at Options for Women Pregnancy Help Clinic. If you believe you may be pregnant and would like to schedule an ultrasound, call our office today at 863-393-6988.